Since it is well established that there is no licensed product to fulfill the mandate, the time has come to explore this legally. As is stands, every vaccine available to our service members (everyone actually) remain under “Emergency Use,” and much to the dismay of the DoD, there are laws in place to protect our Service Members. That particular law is 10 USC 1107a. To those opposing the mandate on legal grounds, you have probably added this code to a drinking game because you reference it so much. To others, it states:

(a) Waiver by the President.—

(1) In the case of the administration of a product authorized for emergency use under section 564 of the Federal Food, Drug, and Cosmetic Act to members of the armed forces, the condition described in section 564(e)(1)(A)(ii)(III) of such Act and required under paragraph (1)(A) or (2)(A) of such section 564(e), designed to ensure that individuals are informed of an option to accept or refuse administration of a product, may be waived only by the President only if the President determines, in writing, that complying with such requirement is not in the interests of national security.

If the President, under subsection (a), waives the condition described in section 564(e)(1)(A)(ii)(III) of the Federal Food, Drug, and Cosmetic Act, and if the Secretary of Defense, in consultation with the Secretary of Health and Human Services, makes a determination that it is not feasible based on time limitations for the information described in section 564(e)(1)(A)(ii)(I) or (II) of such Act and required under paragraph (1)(A) or (2)(A) of such section 564(e), to be provided to a member of the armed forces prior to the administration of the product, such information shall be provided to such member of the armed forces (or next-of-kin in the case of the death of a member) to whom the product was administered as soon as possible, but not later than 30 days, after such administration. The authority provided for in this subsection may not be delegated. Information concerning the administration of the product shall be recorded in the medical record of the member.

(c) Applicability of Other Provisions.—

Currently, there is no waiver signed by the president so military members must still be informed of the option to accept or refuse an EUA product. What this is saying that if you are receiving an EUA product you are LEGALLY REQUIRED to be told you have the option to refuse that product.

The word option can be iNtErChAnGeAbLe with right. This might be the only case of interchangeability the DoD objects to. The law cross referenced in 1107a is the Federal Food, Drug and Cosmetic Act section 564(e)(1)(A)(ii)(III) aka 21 U.S. Code § 360bbb–3 – Authorization for medical products for use in emergencies. So any provision found in that law is applicable to 1107a. The exact provision is that is specifically referenced is:

Think of it like Miranda Rights, you always have your constitutional 5th Amendment rights, but if you are arrested you must be told you have them, and if not you could walk free on a technicality. So in the case of Emergency Use products, the military only can be exempt from being INFORMED that they have the right to refuse the product. What that says to me is that whether you are informed or not, you can still refuse the product. Your inherent right to bodily autonomy has not been removed, a protection found in the fourth amendment. And has been well established, that upon entering the military, members do not forfeit their constitutional rights.

The most famous exercise or interpretation of this amendment is Roe v. Wade, the expectation of privacy, while not written into the constitution has been inferred from the provisions of the 4th amendment. Now, the military is very much in your business, but legally, especially for medical or mental health issues etc etc, there is a reasonable expectation of privacy. Your primary care physician cannot just post your health records in a public forum, so to say there is no privacy is a bit misleading. That is why, in my humble opinion, AR 40-562 has a list of exemptions to overcome the possibility of an unconstitutional medical program. However, the Covid 19 vaccine program has been rampant with violations of long held regulations, illegal actions by commanders enforcing EUA products on their soldiers and a break from norms.

Speaking of AR 40-562. Here is what it states about administering EUA products to the military:

DING DING DING! By the way, the FDA has made it a requirement for those receiving an EUA Covid 19 vaccine to receive a fact sheet outlining the legal and medical information.

And on an unrelated note:

I know there is a fear of forced injections, but at this moment it seems unnecessary. No where in AR 40-562 or the referenced US Code, does it allow for an EUA product to be forcibly injected into anyone. The DoD has already developed a pretty foul reputation over the last few years, could you imagine the fallout if one video of a soldier being held down and vaccinated? They can’t take the hit optically, and sadly that might be enough to stop them. And the incredible legal implications, but what’s the law anymore, amirite?

Also, I am not a lawyer, I just play one on the internet. This is just my view on the issue. But some lawyers at the DOJ have weighed in on this issue back in July (they probably regret it now).

janineg385
Strange things are afoot at the Circle K 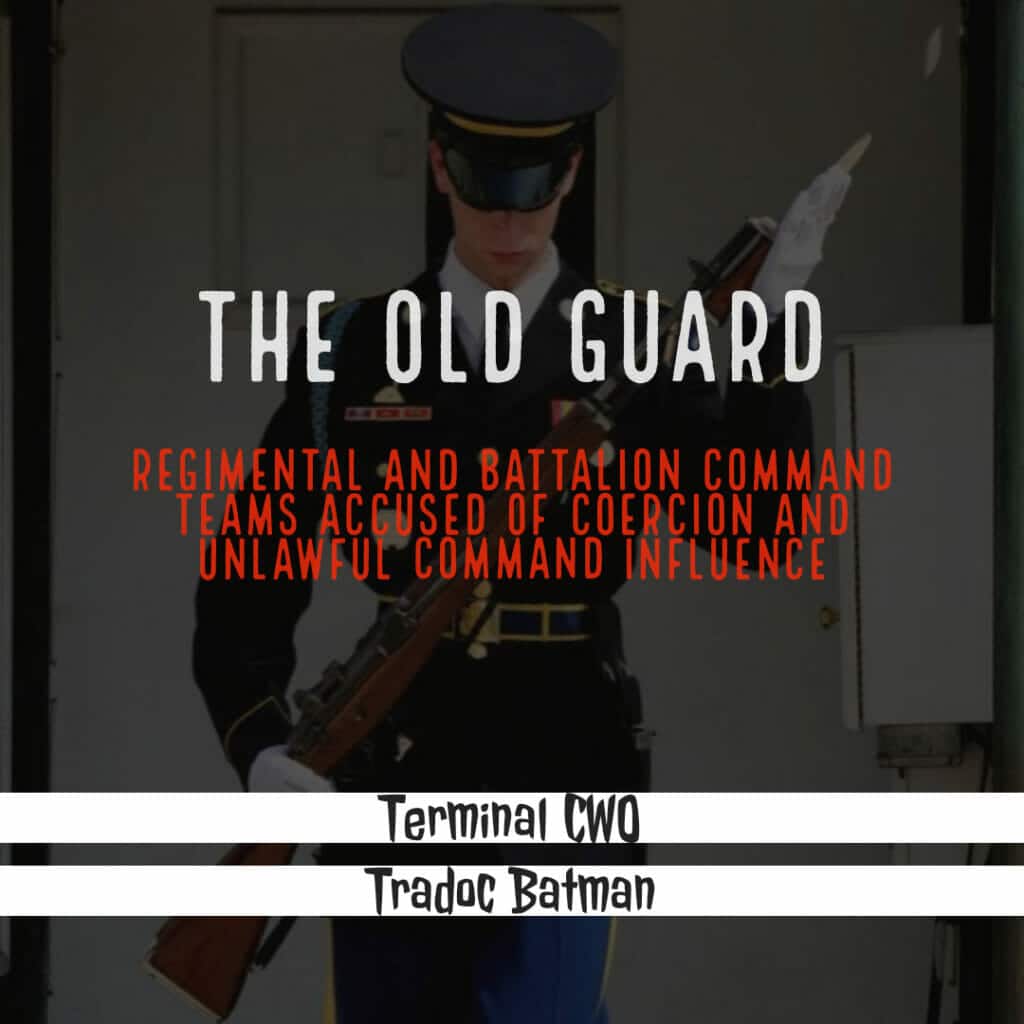 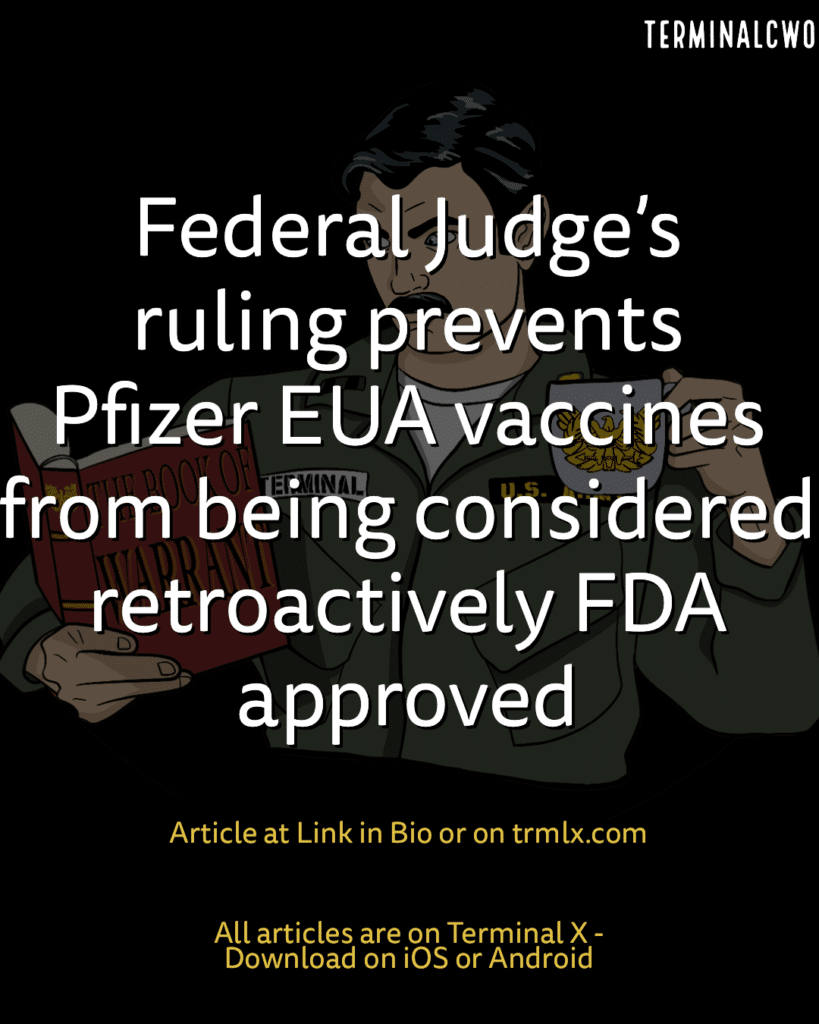 I want to talk about suicide. Every time I hear or read about someone saying, “just reach out if you’re thinking about hurting or killing…

Part 5: The Greatest Game the DoD Ever Played